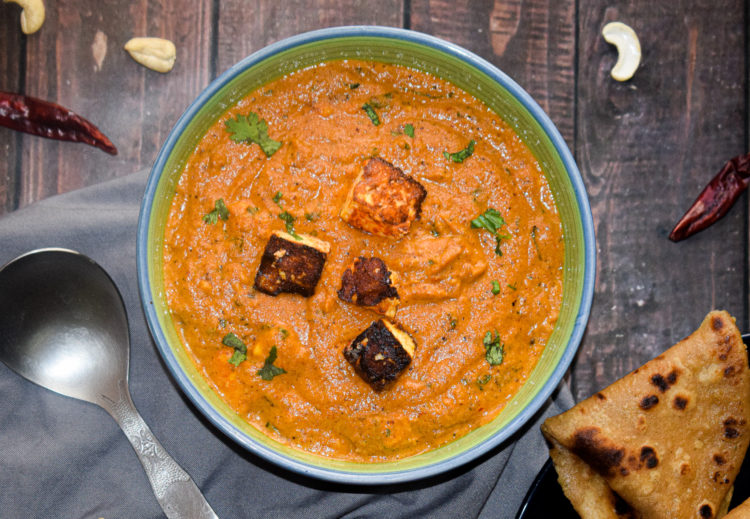 A dish that is a must order when at an Indian restaurant or dhaba is Paneer Butter Masala. A luscious tomato-cashew-cream gravy with chunks of soft paneer pieces is pure joy. It’s on the heavier side but feels absokutely worth every dunk with the butter naan on the side. This recipe is my postcard to the city of Delhi, a place I have lived many lives in, since the last decade.  Because I have been living in the capital for so long, I have also started to love the food eaten here. This love did not happen overnight. It took many months (maybe years) for Delhi and I to accept each other. But we eventually made it. Ten years is a long time and within this time I have learned to love most of the things I detested as an 18 year old who first moved here. From someone who could not imagine the idea of eating rajma with plain rice, I am someone who finds utmost comfort in it now. Several other similar developments have taken place in the course of time. In fact, most things I cook are an amalgamation or a mix of all the kinds of food I’ve been exposed to in these 30 odd years. It’s probably a part of my unending quest to explore where do I really belong. With bits and pieces of my mind and soul scattered in so many places (real and imaginary), I guess that’s a question I should add to my list of life’s mysteries. This Paneer Butter Masala recipe has been perfected over many failed attempts. So I can assure you this one if fail-proof. And for an Indian household, the ingredients that go into this amazing recipe might already be lying around. That’s the beauty of Indian cooking. Kitchens are mostly stocked with the basic masalas and vegetables. This is a version that tastes as good as your favourite restaurant. Trust me, there is absolutely no exaggeration there. The makhni gravy is TO DIE FOR and you will be astonished to know how easy it to put together.

This paneer butter masala us cooked in three stages. Let’s take a detailed look at the recipe.

I hope you try out this delicious and fail proof paneer butter masala for yourself. It’s absolutely divine. If you have any questions, feel free to reach out to me with a comment or connect with me on Instagram or Facebook. For all my videos, you can subscribe to me on YouTube.